December 2008 / Hope for the Holidays

December 2017 / For All Seasons: Winter Wonderland

October 2018 / The Stories We Weave: Standing on the Side of Love

December 2018 / The Stories We Weave: Our Own Christmas List

May 2019 / The Stories We Weave: Singing with Pride

December 2019 / Evolution: You Are Peace 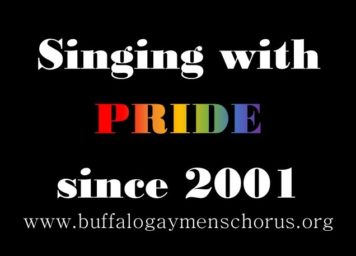 Your "voice" and generosity brings enlightenment, inspiration, healing, empowerment and harmony to the greater community and to each of us. Your contribution ensures the continued growth and success of the BGMC.

The Buffalo Gay Men’s Chorus is dedicated to producing vocal music of high quality in the rich tradition of men’s choral singing. We seek through song not only to entertain, but to enlighten. We sing to create harmony as we celebrate pride in the community and in ourselves.